Comfortably sitting in a blanket and watching classic holiday flicks is one of the best ways to feel the Christmas spirit. It is that merriest time of the year when all you want to do is watch an uplifting Christmas movie with a nice cup of hot chocolate and a freshly baked cookie, of course!

Whether you want to enjoy an enticing Hallmark movie or a tried-and-true classic, there are countless holiday movies to pick one from, including cheesy rom-coms and family movies. We have put together a list of the 10 best Christmas films that melted even the most cynical critic’s hearts.

So, let’s get started!

Frank Capra’s film, it’s a Wonderful Life beautifully explains the true essence of Christmas. Jimmy Stewart plays the role of George Bailey in the movie. He has so many problems in his life that he decides to finally quit. But as he steps on the bridge to jump off, an angel visits him to show the real value and significance of life.

It rarely happens that the third sequel of a series turns out to be as good as the two previous ones, but National Lampoon’s Christmas Vacation received the same love from viewers as its predecessors.  The film tells a story about a guy who wanted to make the best out of Christmas Eve but everything happens completely opposite of how he had imagined.

After the huge success of his movie Black Christmas, Bob Clark directed another classic Christmas movie with a completely different storyline. It portrays a nostalgic feeling of a 9 years old boy, whose only wish is to get an air rifle for Christmas. If you have a reliable cable like Spectrum TV packages, the movie will surely play on Turner Classic Movies (TCM) network on 25th December on a 24-hour loop.

White Christmas is a perfect musical movie to brighten your holiday mood. It is a 1954 classic movie starring Danny Kaye and Crosby as partners for a musical act. These performers duo form a team with two sisters to lend a helping hand to their former military commander in saving his lodge.

One of the best comedy movies of all time is undoubtedly home alone. It is a story of an 8 year old boy, Macaulay Culkin, whose family accidentally forgets him while leaving for France. But, when a couple of blockhead thieves try to break inside the house, the kid sets up a battle ground.

You can never go wrong with this classic Christmas comedy drama. It is a story of a man who claims himself as a real Santa Claus and the consequences he faces as result. If you are planning to watch this movie, get ready for some real laughing fits.

This movie is one of the best adaptations of Charles Dicken’s renowned story. The movie features Jim Carry as Ebenezer Scrooge, a mean and miserly man, who comes across three ghosts on Christmas Eve. The spirits teach him to become a better human.

Tim Burton’s The Nightmare Before Christmas

Since the initial release, people have been arguing whether the Nightmare before Christmas is a Halloween movie or a Christmas movie? For this mega holiday movies list, we are associating it with Christmas.

The Tim Burton talent is a skillful work of visual tricks and treats in a scarymanner that only he can attain. As long as he is as pleasing asthis movie is, we don’t mind even a Skeleton Santa Claus making an appearance on Christmas.

An Academy Award Winner for the Best Picture, The Apartment is a tale of a single man who allows his colleagues to utilize his place for their extramarital affairs but falls in love with the wife of his boss. The movie is famous as one of America’s all time loved holiday flicks.

From it’s a Wonderful Life and Home Alone to classics like Miracle on 34th street, we have listed some of the best holiday films of all time in this blog. We are certain that these heartwarming movies will fill your Christmas holidays with joy and entertainment. For now, just choose a flick, grab some caramel popcorns, and start the movie marathon. Happy holidays!

What New Technology Can Bingo Slots Use To Make Games More Exciting?

How To Install A Garage Service Door: 3 Tips To Keep Things Simple! 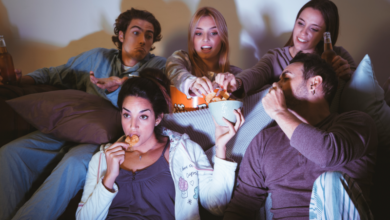